​On Sunday morning, an Azusa Police Officer on patrol witnessed a large crowd of six to seven men fighting in a commercial parking lot in the 100 Blk. of N. Azusa Ave. Two of the men were on the ground. When the officer identified himself, the men ran from the scene, with the exception of the two men on the ground who had both been stabbed. The officer was able to capture one of the men who ran as the others continued to flee.

At least one of the men ran into a residence in the 100 Blk. N. Alameda Ave. and refused to respond to officer's orders to exit the residence. The Azusa Police Department Special Weapons and Tactics team (SWAT) was activated and surrounded the home. After SWAT arrived, two men and a female voluntarily exited the home and were detained by officers on scene. One of those men was arrested for felony assault and the other two subjects were released after investigators determined they were not involved.

The two stabbing victims were transported to a local hospital and sustained non-life threatening injuries. This is an active investigation and we are not able to release the names of those involved. The motive for the fight is being investigated by the detective bureau, and anyone with information is encouraged to contact Sgt. T. Smith at the  Azusa Police Department (626)812-3200.

If you have any information regarding this case or subjects involved in this case, please call the Azusa Police Department at (626) 812-3200. If you wish to remain anonymous, you may do so by clicking here. 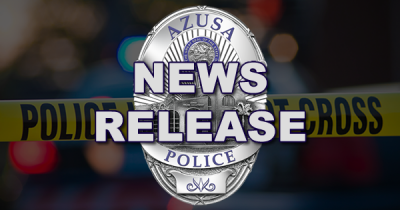