​This Labor Day, the Azusa Police Department Reminds Citizens to Drive Sober or Get Pulled Over In Effort to End Impaired Driving

The end of summer is traditionally marked by the Labor Day holiday, a time for our country to reflect on the hard work of our fellow Americans. The long weekend is celebrated through picnics, pool parties, and barbecues, as families and friends enjoy the last few days of summer before fall and winter approach. Sadly, the Labor Day holiday is also one of the deadliest, with alcohol and drug impaired drivers endangering themselves and others on America's roadways.

This year, the Azusa Police Department is partnering with Local Police, Sheriff's and the CHP across the state to stop impaired drivers and help save lives. The high-visibility national enforcement campaign, Drive Sober or Get Pulled Over, runs from August 18 through September 4, 2017.

Enforcement will consist of DUI saturation patrols during this period. The Azusa Police Department will also be conducting a DUI Checkpoint on Sunday, September 3rd between the hours of 6:00 PM and 3:00 AM. These enforcement activities will be in areas with high frequencies of DUI collisions and/or arrests. These extra officers on the road, along with routine patrols, are aimed to drastically reduce impaired driving in our community's roadways.

Statistics nationwide show a dangerous trend in impaired driving. According to the National Highway Traffic Safety Administration (NHTSA), 10,265 people were killed in drunk-driving crashes in 2015, a three percent rise in deaths over 2014. That's roughly one person killed every 51 minutes in 2015. That's the equivalent of 20 jumbo jets crashing each year, with no survivors. This is why the Azusa Police Department is working to remind drivers that impaired driving is not only illegal, it is a matter of life and death.

Plan your sober ride home before the party begins as end of summer activities wraps up. It is never okay to drive impaired. Even if you've had one alcoholic beverage, designate a sober driver or plan to use public transportation to get home safely.

Drivers are encouraged to download the Designated Driver VIP, or "DDVIP," free mobile app for Android or iPhone. The DDVIP app helps find nearby bars and restaurants that feature free incentives for the designated sober driver, from free non-alcoholic drinks to free appetizers and more.

Have family or a friend who is about to drive buzzed or impaired? Take the keys away and make arrangements to get your friend home safely. The cost of a ride home is cheap. Drivers caught driving impaired can expect the impact of a DUI arrest to include jail time, fines, fees, DUI classes, license suspensions and other expenses that can exceed $10,000.

Funding for DUI operations is provided to the Azusa Police Department by a grant from the California Office of Traffic Safety, through the National Highway Traffic Safety Administration, reminding everyone to 'Report Drunk Drivers – Call 9-1-1'. 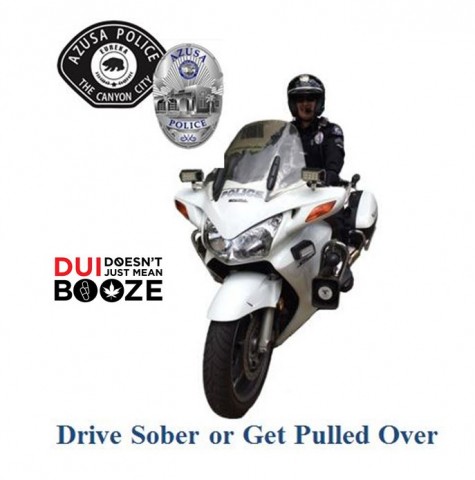 Have Information or Questions?
Contact: Sergeant Robert J. Landeros
(626) 812-3200
This email address is being protected from spambots. You need JavaScript enabled to view it.