Azusa Police Arrest Suspect With Replica Firearms Prior To Marathon

On Saturday, November 4, 2017, at about 4:45 am, the Azusa Police Department received numerous reports of a subject with a firearm in the area of Citrus Avenue and Alosta Avenue. Officers immediately responded and began searching for the vehicle.

According to witness statements, a Hispanic male, about 40 to 50 years of age, had threatened approximately 10 – 15 people who were preparing to participate in the Canyon City Marathon. The male appeared to be holding a rifle while circling the victims in his vehicle. He stopped and exited his vehicle, and pointed the rifle directly at the victims while making some threats. The male entered his vehicle and quickly left the scene, traveling east on Alosta Avenue. The male was driving a black raised GMC truck, with a green toolbox and aluminum wheels, and his passenger window was taped with plastic.

Since several local police departments were assisting the Azusa Police Department in providing security for the marathon, several officers were able to coordinate with each other on searching for the suspect's vehicle. Through this mutual aid, information was quickly developed leading the Azusa Police Department's SWAT Team and Detective Bureau to a residence in Rancho Cucamonga. 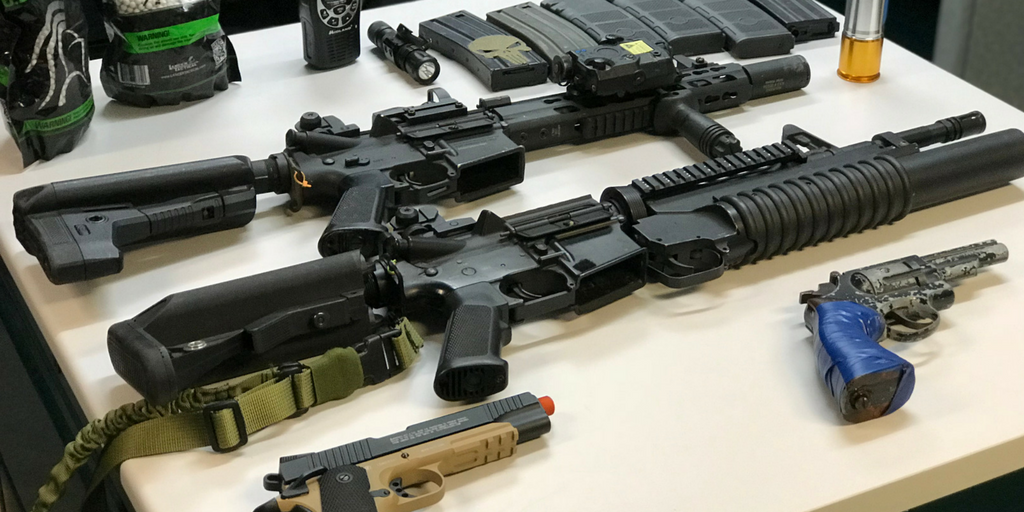 These replica firearms were found in Joseph Fierro's vehicle by Azusa Police officers on 11/4/2017.

After arriving at the residence, officers safely detained Joseph Fierro (Age 51) by his vehicle. A subsequent search of the vehicle resulted in several replica firearms, pellets, magazines, and other items were located.

Fierro was arrested for assault with a deadly weapon and transported to the Azusa Police Department jail, where he is being held on $50,000.00 bail.

Assault with a Deadly Weapon

Assault With A Deadly Weapon Against An Azusa Police Officer

Assault With A Deadly Weapon Investigation