Badges Of The AZPD - Continued 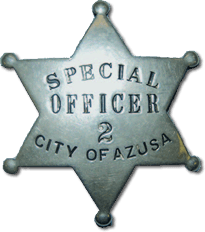 This Special Officer badge #2 has an L.A. Rub. Stp. Co. hallmark which is an abbreviation for L.A. Rubber Stamp Company which made badges from 1884 to 1935. The city museum has the same style badge with a single digit number which authenticates this badge. It was common during the late 1800’s through the 1960’s to issue badges to “favored businessmen” or “friends of the department”. They are known as “juice” badges and were intended to give the person special favor with the police department. I have a gold eagle top special officer badge and an ID card that belonged to a businessman in Azusa. This badge and ID card is shown in the Eagle Top Badge section. 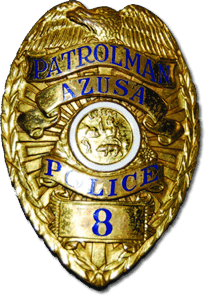 The Patrolman badge #13 has an Entenmann Rovin Co. Pico Rivera hallmark. This hallmark is somewhat unique and is known as the rosette. Rovin and Entenmann companies merged in 1968 and still make badges. This badge was issued by Chief Lloyd Wood. At one time, this badge was worn by reserve police officers, while the regular full-time officers wore the 7 point gold star.

This badge was worn by officers in the 40's and 50's, as indicated in old photographs. You will notice the word "Patrolman" on this badge.  Just after Chief Wood took over the department, the word was changed to "Police Officer."

There is no known record as to when the department officially changed from the eagle top badge to the 7 point star badge. 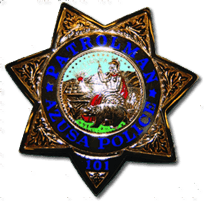 There is no known record of when the Azusa Police Department changed its badge from the gold eagle top shield to the gold seven point star. The gold star badge was worn by Azusa police personnel until May 1989. There were three different manufacturers of the gold star. They were Entenmann, Entenmann-Rovin, and Sun Badge.

Notice the rank on the badge was changed back to Patrolman when these badges were issued. 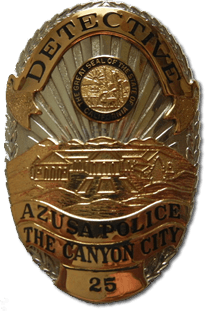 In May 1989 all police personnel were issued a new oval badge which had a depiction of the city hall in the center panel. 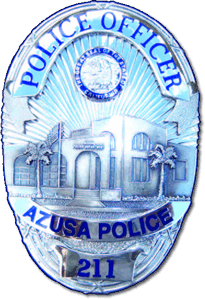 The Azusa Police Department is currently wearing this badge which was issued in November 2001. As with the two previous oval badges, these badges were designed by Retired Lieutenant Jim Collins.  These badges are only made by the Sun Badge Company. As of this writing the badges are identified by the following insignias or numbers:

The yellow and green patch was used until 1982, at which time the department changed from wearing a tan shirt and green pants for their uniforms, to the style worn today, which is all blue.  Once the blues were worn, the gold and blue patch (right) was worn until about the year 2000, at which time the department went to a subdued silver and blue patch (center).