This Friday, September 2nd, 2016, the Azusa Police Department's Traffic Bureau and social media team are collaborating to bring safety to the holiday weekend.

Go On Patrol With The Azusa PD

Starting at 3pm on Friday, the traffic safety grant coordinator, Lieutenant Paul Dennis, and Officer Mike Bires from the social media team, are inviting you to "hit the streets" in a virtual way - on Facebook and Twitter. Members of the community who tune in to the department's Facebook and Twitter page will have an opportunity to see what happens during a traffic officers shift. They'll explain what happens during a traffic stop, share accident investigation information and highlight traffic safety concerns for the city of Azusa. In addition to this, the community will be able to ask questions live, while the officers are in the field.

Starting at 6pm, the department will conduct a DUI/Drivers License Checkpoint at an undisclosed location within the city limits until 2:30 a.m.

The deterrent effect of DUI checkpoints is a proven resource in reducing the number of persons killed and injured in alcohol or drug involved crashes.Research shows that crashes involving an impaired driver can be reduced by up to 20 percent when well-publicized DUI checkpoints and proactive DUI patrols are conducted routinely. DUI Checkpoints are placed in locations based on collision statistics and frequency of DUI arrests, affording the greatest opportunity for achieving drunk and drugged driving deterrence. Locations are chosen with safety considerations for the officers and the public. 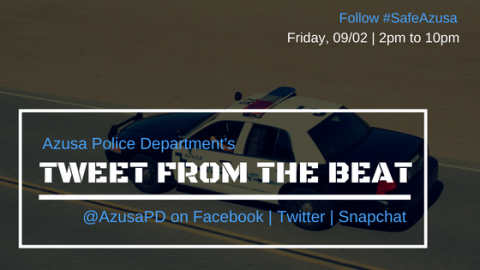 In California, this deadly crime led to 867 deaths and over 23,000 serious injuries in 2013 because someone failed to designate a sober driver.Nationally, the latest data shows over 10,000 were killed by an impaired driver. Over the course of the past three years Azusa officers have investigated 30 DUI collisions which have claimed 2 lives and resulted in another 44 injuries.

Officers will be looking for signs of alcohol and/or drug impairment with officers checking drivers for proper licensing delaying motorists only momentarily.When possible, specially trained officers will be available to evaluate those suspected of drug-impaired driving, which now accounts for a growing number of impaired driving crashes.

Recent statistics reveal that 30 percent of drivers in fatal crashes had one or more drugs in their systems.A study of active drivers showed more tested positive for drugs that may impair driving (14 percent) than did for alcohol (7.3 percent).Of the drugs, marijuana was most prevalent, at 7.4 percent, slightly more than alcohol. Everyone should be mindful that if you're taking medication – whether prescription or over-the-counter – drinking even small amounts of alcohol can greatly intensify the impairment affects.

Law Enforcement emphasizes the preventable nature of drunk driving reminding everyone that all it takes is a little planning ahead. Designate a sober driver or call a cab. But whatever you do, don't drink and drive. The California Office of Traffic Safety DDVIP (Designated Driver VIP) mobile app is now available for free download on iOS and Android devices.

Launched last year, the new DDVIP app offers enhanced features, allowing users to "Map a Spot" with their current location to find DDVIP partnering establishments in their area or a "List of Spots" to search all participating bars and restaurants throughout California. Users will be offered free incentives at each bar to celebrate their life saving role.They can stay up-to-date with the latest from DDVIP and see what other users are saying via its social tab. Also through the app, for those who want to imbibe but also make it a point to plan ahead, users can easily order a sober ride from Uber, Lyft or Curb – all from one screen.

Drivers caught driving impaired can expect the impact of a DUI arrest to include jail time, fines, fees, DUI classes, other expenses that can exceed $10,000 not to mention the embarrassment when friends and family find out.

Funding for this checkpoint and the virtual ride-along is provided to Azusa Police Department by a grant from the California Office of Traffic Safety, through the National Highway Traffic Safety Administration, reminding everyone to 'Report Drunk Drivers – Call 9-1-1'.

If you have any information regarding this case or subjects involved in this case, please call the Azusa Police Department at (626) 812-3200. If you wish to remain anonymous, you may do so by clicking here.