Remember: Drive Sober or Get Pulled Over

Azusa, CA—This holiday season, the Azusa Police Department will work around the clock to keep drivers and passengers safe as they search for impaired drivers. From December 15, 2017 through January 1st, law enforcement is partnering with the California Office of Traffic Safety (OTS) and National Highway Traffic Safety Administration (NHTSA) in a special year-end Drive Sober or Get Pulled Over enforcement mobilization to get impaired drivers off the street and to spread the word about this dangerous crime.

Driving under the influence of alcohol can have deadly, devastating consequences. Nationally in 2016, 37,461 people were killed in motor vehicle traffic crashes, and 28 percent (10,497) died in crashes where a driver had a blood alcohol concentration (BAC) over the limit of .08. California reported 1,059 DUI deaths at .08 or above.

"Two simple words can keep your holiday festivities safe – plan ahead," said OTS Director Rhonda Craft. "Before you head out to any celebration, plan how you are getting home safely. If you are drinking, that means knowing what sober driver or service will be using." Drivers are encouraged to download the Designated Driver VIP, or "DDVIP," free mobile app for Android or iPhone. The DDVIP app helps find nearby bars and restaurants that feature free incentives for the designated sober driver, from free non-alcoholic drinks to free appetizers and more.

Funding for these DUI operations is provided to the Azusa Police Department by a grant from the California Office of Traffic Safety, through the National Highway Traffic Safety Administration, reminding everyone to 'Report Drunk Driver – Call 9-1-1'. 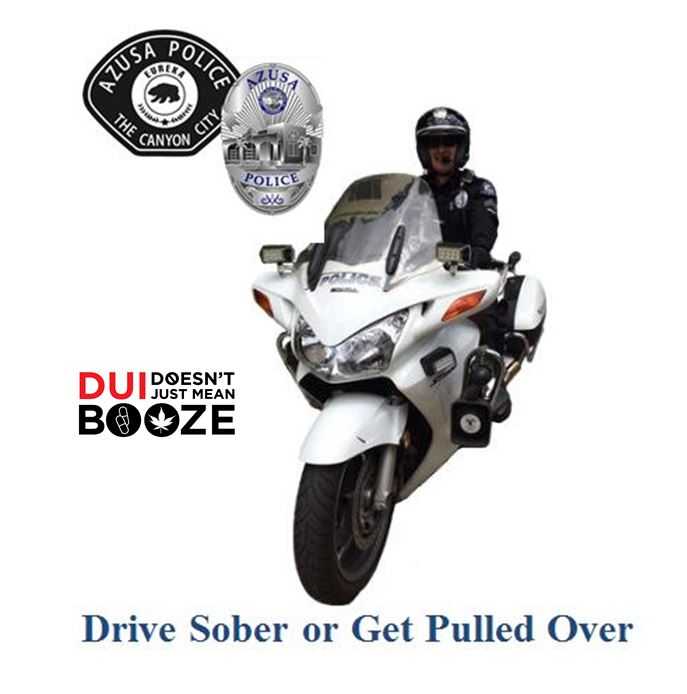 If you have any information or questions regarding this article, please contact Sergeant Robert Landeros at the Azusa Police Department at (626) 812-3200, or via email at This email address is being protected from spambots. You need JavaScript enabled to view it.